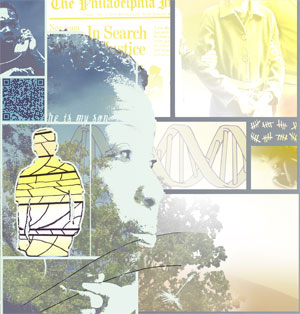 For the past year, I have been working in conjunction with my mural class at Graterford Prison, various ex-offender organizations on the streets and families of the incarcerated throughout the city. The theme of our collaborations, and my subsequent mural explores the impact of incarceration on Philadelphia families. Family Interrupted is my growing multidisciplinary project, that contains the input, stories, and hard work of over 100 contributors as of this date.

Mural Arts and I have partnered with the Pennsylvania Prison Society and their facilitator Anne Shwartzmann, running workshops with groups of people and organizations (such as M.I.M.I.C. based in North Philadelphia) across the city, as well as in the Prison Society, Graterford, and St Gabriel’s Hall.

These participants are impacted by incarceration at various levels. For example, The Graterford Class and their families are looking at 20 plus years of separation, one man in my class will be behind bars for his 40th year this year. These men have seen the face of their entire family change in that time, and yet there are dedicated family members that frequently visit and write out of loyalty, and responsibility. In St Gabriel’s Hall, youth can qualify for weekend furloughs to see their families, and then go back to jail during the week.

Since the mid 90’s only 5 men have ever received commutations on their life sentences, we have worked with 3 of these men for this project as well as men who have served their time and have been released. They have shared their experiences about the reintegration process within their communities and their own families; most memorably to an audience of the teens and young adults of Mural Arts’ Youth Violence Reduction Program. These forums were not the only way in which people can become involved in the project.

The Guild program under Janice Smith has constructed 12 mailboxes, painted by myself and the Graterford program. These boxes are placed in various Prison visit waiting rooms, the Prison Society, Main branch of the Public Library, City Hall, The Gallery at Market East and in the neighborhood of the mural. Each box comes with a questionnaire that invites the participant to share their experiences in having a loved one or family member incarcerated. We are aiming to hear directly from the families while they are waiting for their visitation, a time when they may just want to vent, and be heard. We also look to hear from a broader audience that may or may not be affected by this at all. Each box advertises the project, provides pamphlets with resources, points to the project website, and provides the following statistics as food for thought…

The third way people can participate, even long after the mural is finished, is through the website I created familyinterruptedproject.com. The site was devised as a companion piece that runs concurrently through the life of the mural project and beyond. It acts as a way to provide people with a forum, while at the same time give an outside observer insight into their experiences. The site also provides resources to the families, as well as audio and video from our workshops and updates and press about the project. The site will live on long after the project ends, and my goal is to have the conversation continue. I’ve always searched for a way to include the outside observer during my seven years working in Graterford. I’ve always wished that there could be a way that more people could hear the results of our workshops, read some of the writing, be moved by people’s stories in the same way we are moved that night. I feel that by recording our sessions and posting the audio to our user generated site, we’ve made a big step in the right direction. 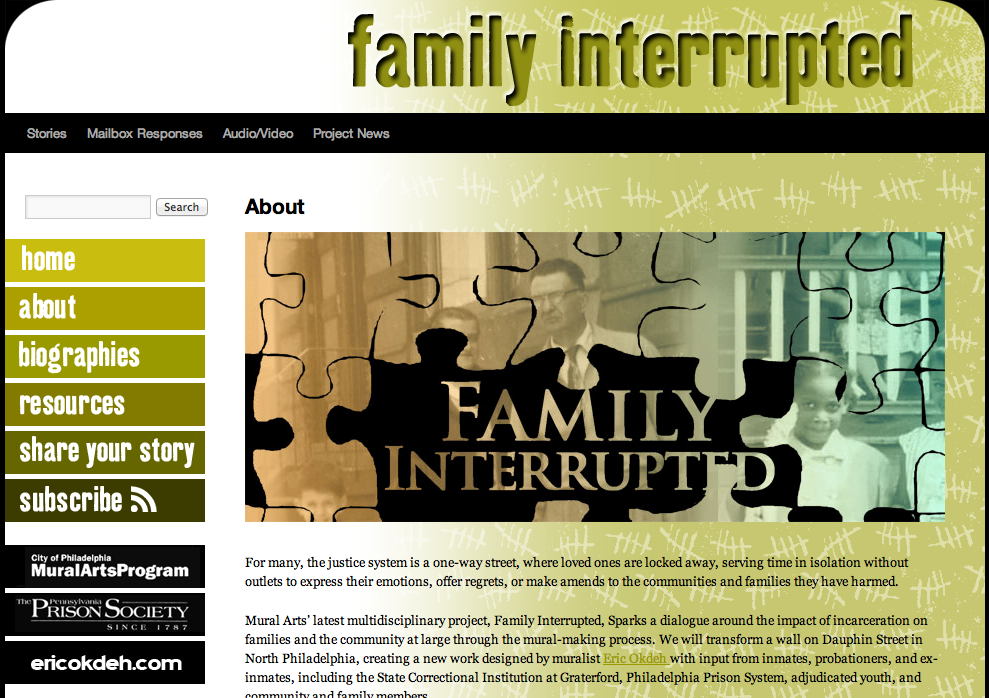 My design took its inspiration from all of the families and people who opened themselves up, opened their homes up to me, brought their children, and shared their stories. The mural will be painted on the corner of Germantown Ave and Dauphin. The “w” shaped wall lends itself nicely to the narrative of the design. The “incarcerated” right side of the wall is tucked slightly away from view at first glance, the full story truly opens up to you once you get closer. It contains the faces and stories of ex-offenders and those still behind bars. Its about how their incarceration affected and forever warped their families, and the great sense of loss that takes place when loved ones pass on. The “family” face of the site shows the words, images, and thoughts from the men, women, and children left behind to carry on. Newly christened breadwinners raising a family on their own and maintaining relationships across great distances to keep the family together. Both sides look and reach toward each other over the center of the design that depicts visiting room life, and its fragmented moments of family interaction. These scenes are interspersed among vignettes of the media, government, and general public opinion which can serve to further complicate that limited interaction.

The church windows (which mimic the church building next to the wall) and the silhouetted figures within each portrait are currently being cut from Stained glass and mirror in my studio.

The design contains a large amount of scannable codes that anyone with a smart phone can scan, using their phone’s camera to have an enhanced experience of the mural. These codes are text based and directly linked to the familyinterruptedproject.com and its content. A passer by can scan a code within the mural and be taken to a number of audio clips from our workshops with the Prison Society. You can hear these stories straight from the person. A number of codes take you to pages of the site. Most notably, you can even be taken to the “Share Your Story” page of the site and contribute on the spot! I feel that the timing is right and there is a real ability to interact with the mural, listen and learn, and then respond.