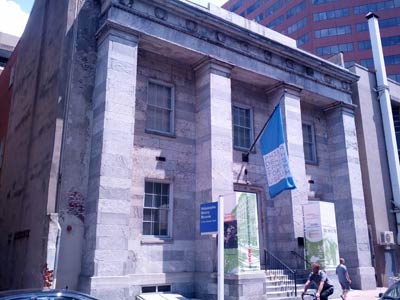 Family Interrupted is coming to the Philadelphia History Museum at Atwater Kent! The Family Interrupted/Community Connected Exhibition will be held in the Community Voices Gallery in the Museum, which is located at 15 South 7th Street. The exhibit will run from July 11, 2012 – December 31, 2012.

The exhibit features a massive 14′ wide print on the finished mural; a print so large, you can scan the mural’s many QR codes using a smartphone. You can hear audio and interact with the project’s website on the SPOT! Those without a smartphone can still get involved by leaving a message in two of our featured mailboxes, which will get posted to the site. Visit the museum to see these and other artifacts from the year and a half long initiative.

This exhibit is also features a video showing the history of the Mural Arts Program in Philadelphia, and its Restorative Justice Program, of which Family Interrupted is its newest project.

Come out for the opening reception August 9th 5:30pm